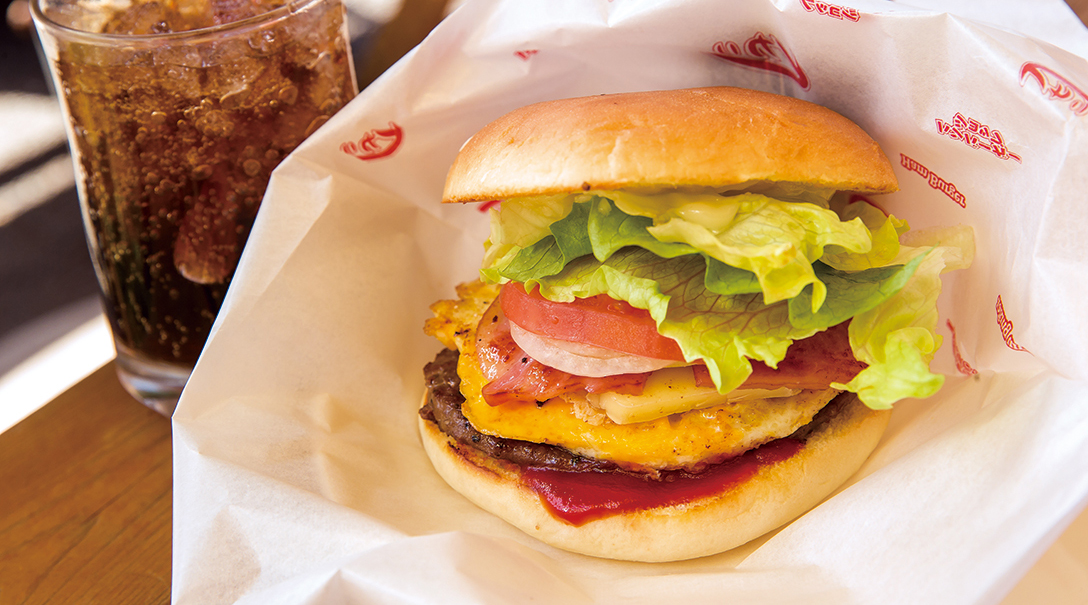 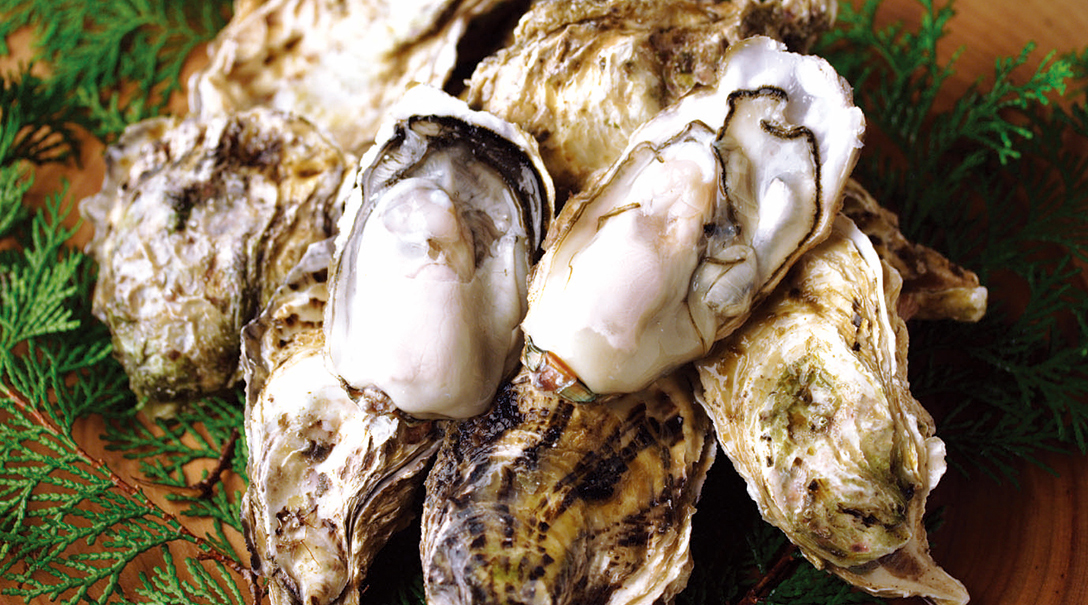 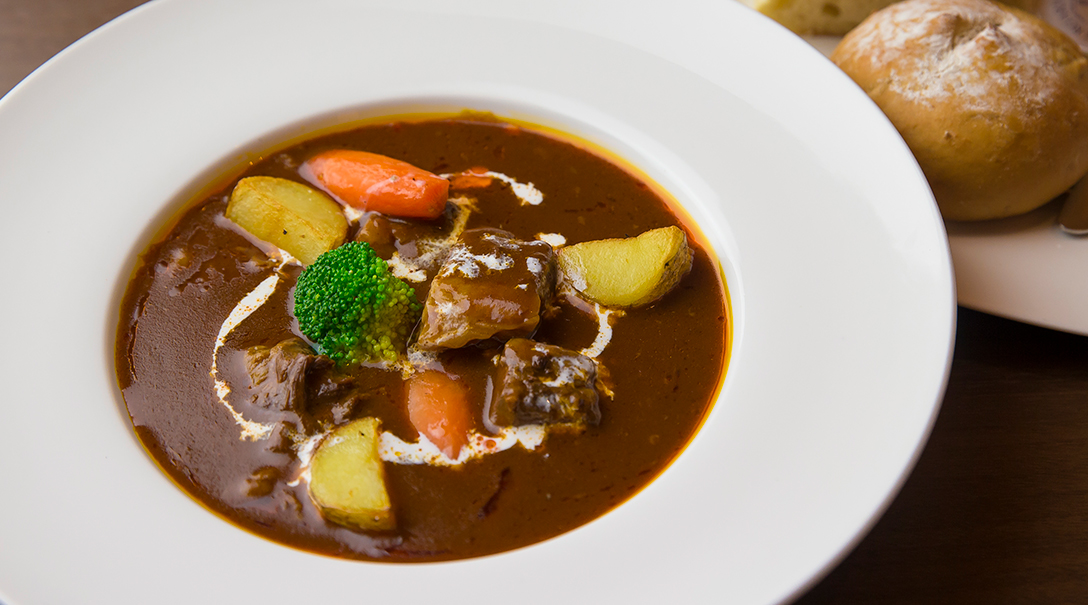 The must-eat gourmet winter food at Kujukushima is Kujukushima Oysters! “Kujukushima Oysters” are rich with the ample nutrients absorbed from the islands and the mountains surrounding the intricate coastline. While having a slightly smaller size shell, they have a wonderful texture, plump and filled with a rich flavor. In season from October through March, you can eat Kujukushima Oysters at various oyster shacks along the coast. In addition, Kujukushima Pearl Sea Resort hold an oyster bake event, the “Kujukushima Oyster Festival” on Saturdays, Sundays, and national holidays in November and February. At the event, 400 charcoal grills are lined up for you! Please experience the delicious plum “Kujukushima Oyster”!

In contract to the “Pacific Oysters” of winter, the “Iwagaki”(Rock Oyster) is in season in summer, from June through August! !
Furthermore, compared to Pacific Oysters, Rock Oysters are Bigger!!
The Rock Oysters grown in the beautiful and nutrient-rich Kujukushima sea are characterized by their plump texture and rich taste.

Nagasaki Prefecture is the leading producer of aquaculture Torafugu in Japan.
To improve the texture and flavor of the “Kujukushima Torafugu” they are raised using a special feed that includes Sasebo Haiyazumi Mikan (green mandarin oranges). The fully grown “Kujukushima Torafugu” are round and fat with a clear color and unique texture. This delicious brand of Fugu can be enjoyed at Japanese, Chinese and Western restaurants and hotels around the city.

It isn’t just Kujukushima Oysters and Torafugu! If you have come to Sasebo, by all means try many of the other fresh seafood as well.
For Example, “Herb Mackerel” which has had herbs added to its feed in order to bring out a flavorful taste, Blue Shellfish, with their bright color shells, rich flavor and thick scallops, or the Uchiwa Ebi Shrimp, which actually have the reputation of being plumper and having a richer flavor than lobsters. Squid, mackerel, and traditional whale dishes are also worth trying.

You can enjoy a variety of hamburgers at the over 25 shops around Sasebo city.

The Sasebo Burger is said to have originated around 1950, first prepared with a recipe received directly from the US Navy. Its biggest characteristic is that it is handmade after receiving the order. While it is often thought that Sasebo Burger = big American size burger, the actual size and flavor varies greatly from shop to shop. With not only Japanese beef patties, but also Chicken cutlets, thickly slice bacon, steak etc., the ingredients have many variations.

Enjoyed with a fresh lemon sauce, this is a delicious gourmet food born in Sasebo.

This steak is brought to your table, sizzling on a hot iron skillet. Sasebo’s “Lemon Steak” differs from large American steaks in that it is a steak prepared for the Japanese palate! With that concept in mind, easy to eat, thinly sliced beef is piled on. Furthermore, the key to this steak, its sauce, is a refreshing soy sauce based sauce, using plenty of lemon juice. After finishing eating the steak, mixing the remaining sauce with the rice and eating it is true Sasebo style. “Lemon Steak” can be enjoyed at restaurants around the city.

A popular local beef stew, uniquely arranged based on the Navy recipe.

Togo Heihachiro, who is said to have had deep relation with Sasebo, is believed to have introduced beef stew to Japan following his studies in England. Based on the “Stewed Beef” recipe found in the Meiji period (1868- 1912) Navy cook book, the “Kaigun Kappojutsu Sanko-Sho”, the “Sailor’s Beef Stew” we enjoy today has been adapted and modified by each shop.
Various bases using beef soup, demi-glace sauce and beef shanks among other things have been devised by hotel restaurant and old-fashioned restaurant. As each taste is different, why not eat and compare them for yourself.

A celebratory sweet from the naval era, this unique dish also contains Taiyaki.

In the old Japanese Naval Era、on the night before returning to its home port, “Zenzai”(a sweet Azuki red-bean) was said to have been served on board ships. Served to help relieve the sailors fatigue, the dish also signified a celebration of their safe return home, and is a tradition maintain presently by the Maritime Self Defense Force. This dish is served at restaurants around Sasebo city as “Kaigun-san Nyuukou Zenzai”.
While generally served hot with mochi, each shop has its own style and sweetness, with some serving it with Shiratama (white rice-flour dumpling) or Taiyaki. A cold version can be enjoyed in summer.